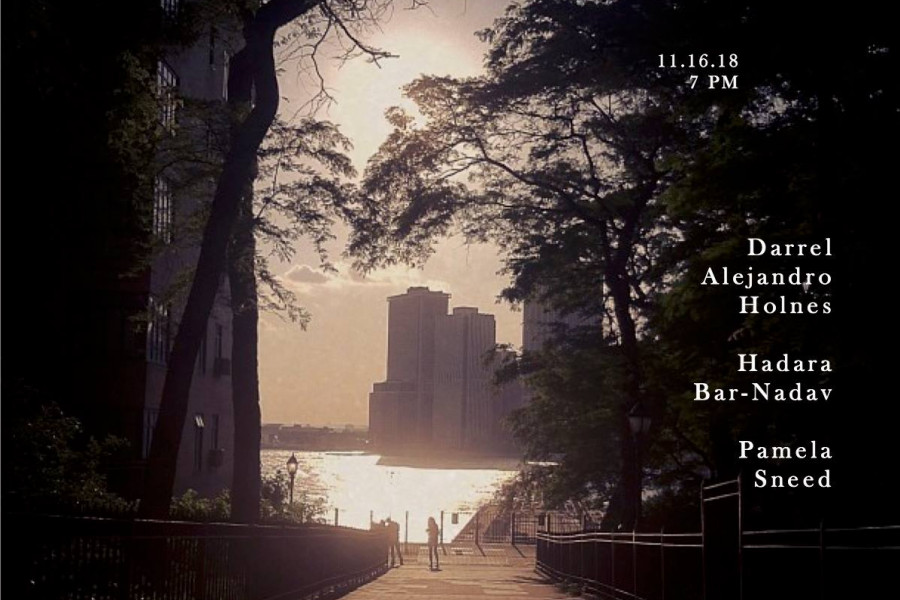 The Brooklyn Poets Reading Series returns on Friday, November 16, at 100 Bogart, featuring poets Darrel Alejandro Holnes, Hadara Bar-Nadav and Pamela Sneed. Free and open to the public. Doors at 7:30, reading at 8. Food and wine courtesy of Bushwick's Tony's Pizzeria and Irving Bottle will be served.

About the Poets:
Darrel Alejandro Holnes is a poet, professor and playwright from Panama City, Panama, and the former Panama Canal Zone. He is the coeditor ofHappiness, the Delight-Tree: An Anthology of Contemporary International Poetry and the coauthor of PRIME: Poetry & Conversations, an Over the Rainbow List selection by the American Library Association, and On Poetics, Identity & Latinidad: CantoMundo Poets Speak Out. He is the recipient of scholarships or fellowships to Bread Loaf Writers Conference, Cave Canem, Canto Mundo, VCFA Postgraduate Writers Conference and the Fine Arts Work Center in Provincetown. He is the winner of the 2017 C.P. Cavafy Poetry Prize from Poetry International and was a finalist for the “Discovery”/Boston Review Poetry Prize, among other awards. His poems have appeared in English, Spanish and French, in Poetry, American Poetry Review, Best American Experimental Writing and elsewhere.

Hadara Bar-Nadav is the author of several books of poetry, most recently The New Nudity (Saturnalia, 2017); Lullaby (with Exit Sign) (Saturnalia, 2013), awarded the Saturnalia Books Poetry Prize; The Frame Called Ruin(New Issues, 2012), Editor’s Selection/Runner Up for the Green Rose Prize; andA Glass of Milk to Kiss Goodnight (Margie/Intuit House, 2007), awarded the Margie Book Prize. In addition, she is coauthor of the best-selling textbookWriting Poems, 8th ed. (Pearson, 2011). Her awards include an NEA fellowship in poetry and the Lucille Medwick Award from the Poetry Society of America, among others. She is a professor of English and teaches in the MFA program at the University of Missouri–Kansas City.

Pamela Sneed is a New York-based poet, writer, performer and emerging visual artist. She is the author of Imagine Being More Afraid of Freedom Than Slavery; KONG and Other Works; and a chaplet, Gift, and book of short stories, Sweet Dreams, from Belladonna. She has been featured in the New York Times Magazine, the New Yorker and on the cover of New York Magazine. She has performed at the Whitney Museum, Brooklyn Museum, Poetry Project, NYU, Pratt, Smack Mellon, the High Line, Performa, Danspace and the Public Theater, among many other places domestically and abroad. Her work is widely anthologized and appears in Nikki Giovanni’s The 100 Best African American Poems. In 2017, she was a visiting critic at Yale and Columbia University, and she is currently a visiting professor at Columbia University’s School of the Arts.